Continueing where I left off in the last post, we ended up at a sea front park full of driftwood sculptures, maybe not the nicest place along the way but the statues were at least creative. 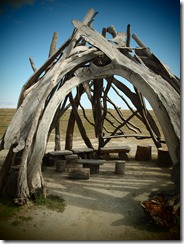 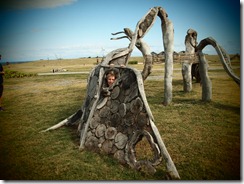 Sculptures made from driftwood

From the park we drove further north until we came to a beach where we should be able to swim, none of us really felt like swimming but we did have some fun playing in the water. We also discoverd that the big building right by the beach was an unfinished hotel that had seemingly been abandoned. 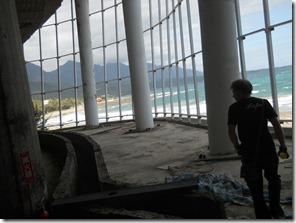 Our exploration of the hotel lead to the lobby… 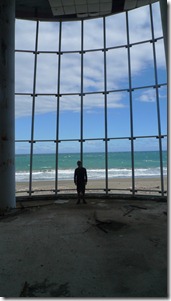 …which has a fantastic view as you can see 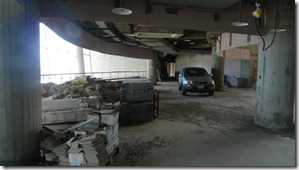 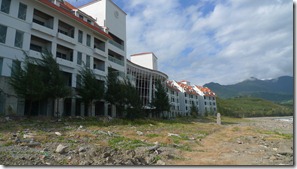 General look of the place, inside and out

The last stop on the way north was a small park where the main attraction is a small stream, the whole point is that, due to certain circumstances the water seems to run up the hill, too bad it is impossible to show it in a picture.

Having marvelled at the gravity defying stream for a while we turned back and went to the other side of the city where we found the place that makes Taidong worth travelling to. No that Taidong is not nice, just that Hualian is very similar but so much more convenient. The place I’m talking about is the Liji Bad lands, it is basically just a dried out riverbed, an oh so cool landscape for playing around in. It might sound very childish but playing with dried mud is more fun than you might think. I could probably spend a whole day there just playing. 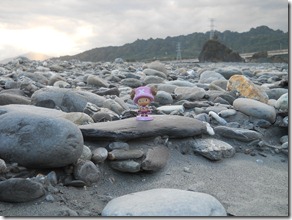 A bright toy in the grey landscape 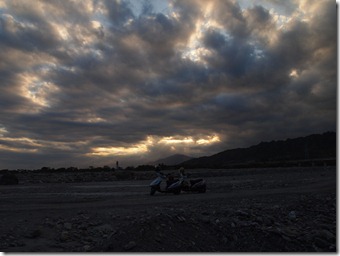 Is it a rock? Is it clay?, I honestly cannot say

Exploring the mud and the cliffs on the riverbank

My brother smashes some dried up clay 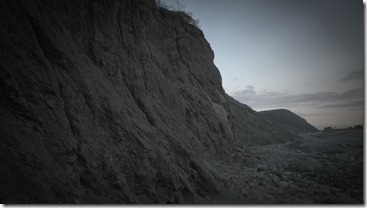 A dark, brooding landscape shot to end with

After playing around in the variably dust and muddy field we all felt we needed to clean up so we drove to the next town for a dip in some hot springs which was nice as usual.

The next day was bleak and rainy and our attempt at being tourist failed rather miserably by going to an unfinished culture park and sitting around in some aborigine style houses in the rain. We decided not to visit any other places since the weather was so bad and went back to Hsinchu instead.

On Monday it was back to school and work for me and Yini and Tedde and Lisa were left to explore the city on their own some more. In the afternoon me and Tedde drove out to the abandoned park that me and Yini discovered earlier this year and had a look at the giant stone steps in the river. Tuesday was even more busy and I only had time to Join my brother in the evening. We took them to sushi express for a nice dinner then drove out to try the Taiwanese culture drug Betel nut, or Binlang as it is known here. The taste was just as horrible as always and the girl selling it was just as scantily dressed as always but it is part of the Taiwanese experience.

Anyway, that was all we had time to do during my brothers short visit but it was fun, I hope Tedde and Lisa enjoyed being here as much as me and Yini enjoyed being their hosts. Now for some final pictures: 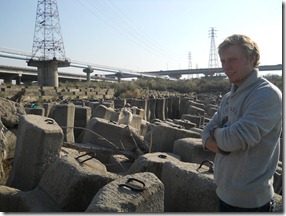 Stone steps in the river 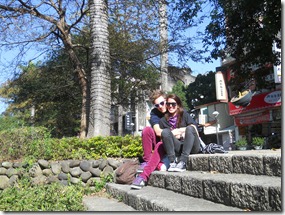 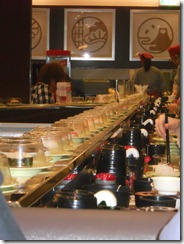